If you plan to fish for greater amberjack or certain other reef fish species in Gulf or Atlantic state or federal waters from a private recreational vessel (includes anglers over 65 years of age), you must sign up as a State Reef Fish Angler prior to your fishing trip. It is a no-cost designation that must be renewed annually. Sign up at GoOutdoorsFlorida.com and visit MyFWC.com/SRFS to learn more.

The Sanibel-Captiva Conservation Foundation has recorded its first sea turtle nest of the season. 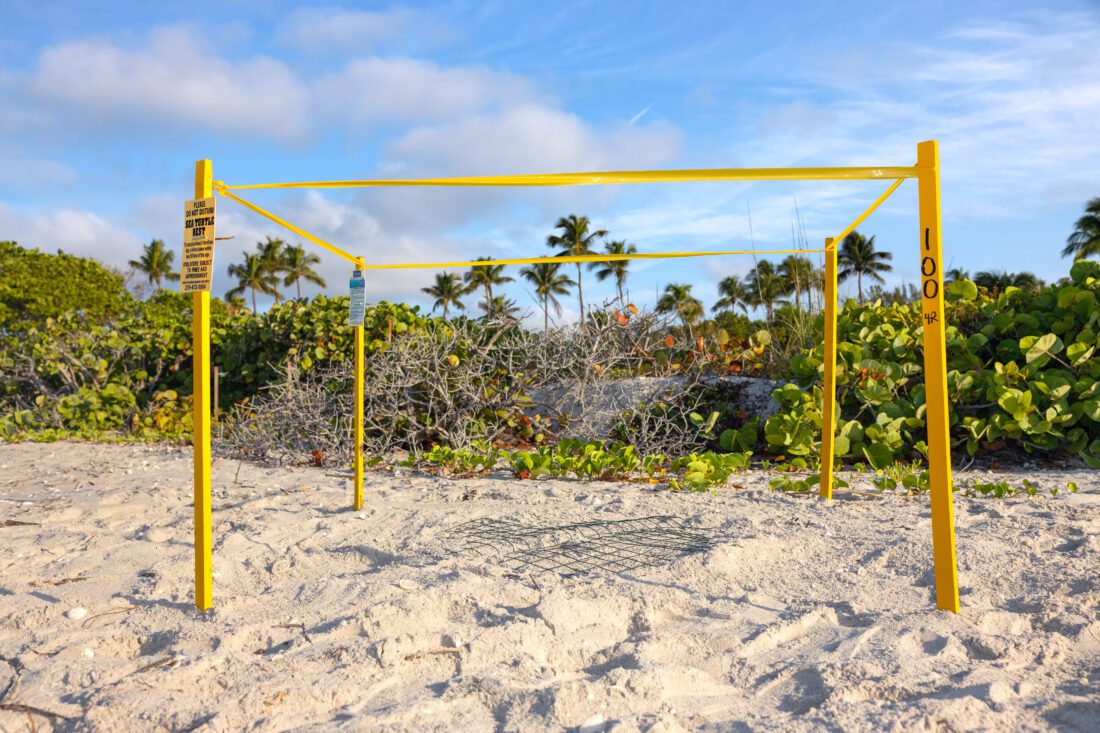 On April 27, a loggerhead nest was discovered on the west end of Sanibel.

“Today marks the same day as the first nest in 2021. Our sea turtle team was excited to get sandy knees again as they put up the vivid yellow stakes that protect nests on our islands,” it reported at the time.

The SCCF also recorded the first false crawl of the season on the west end on April 27.

Sea turtle monitoring originally began on Sanibel in the 1950s with Charles LeBuff and Caretta Research Inc., making it one of the longest-running monitoring programs in the country. When Caretta Research disbanded in 1992, the SCCF took over the program and continues to manage it today.

Loggerhead is the most common marine turtle species to nest on the islands, followed by the green sea turtle. Leatherbacks and Kemp’s ridleys are rarer, but they have nested on Sanibel-Captiva before.

Summary
Although the pace of sales has slowed since their peak in 2021, the 3,171 closed sales for March 2022 exceeded any month preceding the pandemic-induced surge we experienced from mid-2020 through 2021. The increase in new listings in March were welcomed by buyers and, although the 4,106 new listings for the month were the most we’ve seen for any month since early 2020, they are directly in line with the rate at which listings entered for March in the years preceding the pandemic. With new listings entering the market at a more normal pace, and with sales having cooled down somewhat from their earlier feverish pace, listing inventory has posted slow but steady increases in recent months. However, with 2,456 properties available at the end of March, we are a long way from the pre-pandemic level of just under 13,000 properties posted in January of 2020, a number which was considered to have reflected a slight undersupply at the time.

As of April 7, the SCCF had recorded no early activity or false crawls.

Sea turtle monitoring originally began on Sanibel in the 1950s with Charles LeBuff and Caretta Research Inc., making it one of the longest-running monitoring programs in the country. When Caretta Research disbanded in 1992, the SCCF took over the program and continues to manage it today.

Loggerhead is the most common marine turtle species to nest on the islands, followed by the green sea turtle. Leatherbacks and Kemp’s ridleys are rarer, but they have nested on Sanibel-Captiva before.

Loggerheads typically are about 2 feet to 3 feet long and weigh 150 to 300 pounds. With large, bulky block-like heads and powerful jaws — how they got their name — they prey on hard-shelled mollusks, whelks and conches. Females lay three to six nests per year on average but nest every couple of years.

Green sea turtles are bigger, about 3 feet to 3 1/2 feet and weighing upward of 350 or 400 pounds. Their head is small relative to their body, and they are named “green” because their fat is green-colored due to a mostly vegetarian diet of seagrass and algae. Greens lay three to six nests every other year.

Leatherbacks are the largest of the species, growing up to 6 feet in length and weighing 500 to 1,500 pounds. With a diet that consists almost entirely of jellyfish, they do not have a typical “hard shell” like the others; theirs is a “leathery-skin” shell with seven distinct ridges along it, which serves a purpose. Nesting every couple of years, leatherback turtles typically lay five to eight nests.

The Kemp’s are the smallest of the sea turtle species. They average about 1 foot to 2 feet in length and can weigh 50 to 100 pounds. Kemp’s ridleys are omnivorous so they will eat a range of different prey, including crustaceans, mollusks, and fish.

Nesting every one to three years, they lay two to four nests — but not at night, like the other species. In the 2021 season, the SCCF recorded a total of 931 nests and 46,796 hatchlings.

As for 2022, regional evidence shows an increasing nesting trend over the years.

You can help sea turtles that nest on Florida’s beaches, you just need to follow below rules

In addition, boaters can do their part to keep the surrounding waters sea turtle-friendly by:

Relaxing, enjoyable, and filled with adventure, are some of the ways that families use to describe Blind Pass. Blind Pass sustains abundant wildlife while providing locals and tourists with a pristine area for shelling and fishing. From swimming to sunbathing, Blind pass provides endless opportunities for adventure and fantastic views of the island.

History: Blind Pass was re-opened in 2009 after closing for many years. The reopening was a monumental project that was spearheaded by Commissioner Rene Miville. Maintaining Blind Pass in an open state is an important factor contributing to enhanced flushing of the interior waterways of Captiva and Sanibel.

Current State of Blind Pass after the 2021 Beach renourishment: As expected, Captiva’s beach sand migrates south towards the pass, contributing to the creation of natural sand bars along with the opening of the pass, these “by-passing bars” are beneficial as they allow the new sand from Captiva to continue southward and reduce the filling inside of the pass. Additionally, the sand can continue its natural course south benefiting the beaches of Sanibel.

Maintenance Dredging Status: Permit applications are already in process by the County with the various agencies. The County is currently monitoring the pass and dredging will commence when the beach from the recent Captiva nourishment project stabilizes. The County stands ready to respond if the need to act sooner arises.

The City of Sanibel received the following Notice from the Sanibel Prescribed Fire Task Force announcing an informational (virtual) meeting regarding prescribed burns and “firewise” principles on Sanibel.

During the 2022 summer/fall season, the Sanibel Prescribed Fire Task Force is planning prescribed burns on the following conservation lands:

Recognized as the unofficial end-of-season celebration for the islands, the Sanibel-Captiva Conservation Foundation will hold its 9th annual Beer in the Bushes on April 16 from 6 to 10 p.m.

Headlining the outdoor festivities will be Big Sam’s Funky Nation. The group’s boisterous blend of funk, jazz, rock, and hip-hop – as well as an abundance of Southern charm – makes this one of the best-kept secrets in the Big Easy.

The event will feature craft beer tastings and great food, with Sanibel’s Catering by Leslie Adams coordinating the local food truck offerings to complement the beer tastings. Tickets will include $10 in TruxBux redeemable for dinner choices from any of the trucks. The event will also offer a chance to catch up with fellow islanders at the end of a very busy tourist season, according to Siwicke.

Join in 2022 for our annual “Ding” Darling Day. This year’s family-centric event will be making the “great migration” across the Causeway to Lakes Park in Fort Myers to bring the Refuge to our local communities and a wider audience. The move is part of a larger Refuge System-wide Urban Initiative.

Pick an award-winning beer from the list and give it a try: